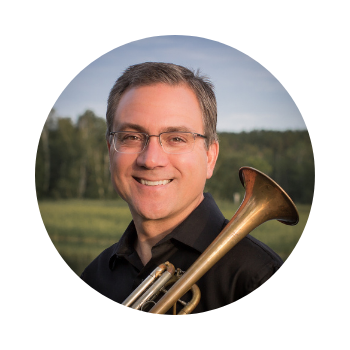 Originally from Brookings, South Dakota, Dr. Del Lyren retired in May 2020 after a distinguished career as Professor of High Brass and Jazz at Bemidji State University in Bemidji, Minnesota. Under his direction as Department Chair, the Department of Music nearly doubled the number of music majors, increased their scholarship endowments by more than 500%, became an All Steinway School with 20 new uprights and Steinway grand pianos, a new technology wing, and the establishment of the Bemidji Concert Series which hosted some of the best musicians in the world.

Students of Dr. Lyren have achieved success in nearly every arena of the music world. With acceptance to nearly every major graduate program in the United States, many have completed doctoral degrees and teach at the university level. Graduates have performed with major popular artists such as Adele, Boyz II Men, and The Temptations. Others have performed numerous times for the President of the United States and played Taps at the Tomb of the Unknown Soldier while serving in the top military bands in Washington, D.C. Dr. Lyren’s students continue to perform in full-time orchestras in the United States and Canada, Broadway shows, and top big bands such as the One O’Clock Band from University of North Texas.

Lyren co-hosted the 2011 conference of the International Trumpet Guild held in Minneapolis and attended by over 1400 trumpet players from throughout the world. He presented a lecture on Conrad Gozzo at the ITG conference in Ft. Worth, as well as lectures presented throughout the world on Rafael Méndez, and recitals at the Euro-ITG conferences in Bad Sackingen, Germany and Kiev, Ukraine. Other guest artist appearances have taken him to England (London, York), Scotland (Edinburgh Fringe Festival), Sweden, Canada, and Mexico. In addition to numerous clinics throughout the region, Lyren has appeared on Prairie Home Companion with Garrison Keillor. In the summer of 2012, he toured with Dave Matthews Band while shadowing Rashawn Ross for an article in the ITG Journal (March 2013 issue). In addition to his BSU duties, Lyrenserves as the Assistant Festival Director for the JENerations Jazz Festival at the Jazz Education Network Conference each January.

Dr. Lyren has performed with numerous orchestras throughout the United States, including the Phoenix Symphony, Phoenix Pops (under the baton of Doc Severinsen), Acadiana Symphony, Lake Charles Symphony, Rapides Symphony, Mesa Symphony, and Sun Cities Symphony. For about 10 years, he performed with the International Brass Quintet – the quintet-in-residence at the International Music Camp. Portions of his recital at the Piccolo Spoleto Festival were aired on NPR’s “Pipedreams” program in 2012. Recently, Lyren has delved into the realm of electronic music by performing EWI (electronic wind instrument) with the faculty electronic music group – the MIDIots. The MIDIots made their debut at The Dakota in Minneapolis in February 2013, andrecorded their first CD – “Before the Dawn”.

Lyren received his Bachelor of Arts degree from South Dakota State University where he studied with John Colson. After receiving his Doctor of Musical Arts and Master of Music degrees from Arizona State University, where he studied with Anthony Plog and David Hickman, his book Magnificent Mendez (a biography of Rafael Mendez) was published by Summit Records. More recently, Lyren initiated jazz studies with Jeff Coffin (sax with Bela Fleck and the Flecktones and Dave Matthews Band). For many years, Lyren served on the Executive Staff of the International Trumpet Guild as the Membership Development and Retention Coordinator. Lyren is also a Yamaha Performing Artist.

The Opus studios in New Hope and Robbinsdale, in-home within 10 miles from Golden Valley, and virtually. Virtual lessons are preferred during COVID-19.

While there are always exceptions (last minute sickness or emergencies), canceled lessons require a 24-hour advance notice in order to receive a refund or rescheduling. Any exceptions will be addressed on a case by case basis.