Opus is proud to have a talented group of writers, made up of Opus instructors and students alike, who contribute to the Opus blog. They have different backgrounds, experiences, and expertise that offers them unique perspectives and insights into all areas of music. Aside from music, Laurent is an eclectic reader who enjoys sci fi, fantasy, classic, and contemporary literature. He is a bit of a Trekkie and must admit to binge watching a few different Star Trek series! Laurent also likes games, running, weight lifting, and yoga. Finally, he has quite a passion for cooking and discovering new and delicious recipes. Thomas has been been playing the viola since he was 11 years old. For many years, he was a student of Stella Anderson at the MacPhail Center for Music. He went on to earn his Associate of Arts from North Hennepin Community College and his Bachelor of Arts in English from the University of Minnesota.

Thomas has ample performance experience, such as performing in pit orchestras for local theater productions and regularly playing viola for programs at churches around the Twin Cities. Thomas is also proud to be a member of the Bloomington Symphony Orchestra since 2001. Kelley recently completed all requirements for her Doctorate of Musical Arts degree at the University of North Carolina at Greensboro, studying with Ashley Barret, where she was the Teaching Assistant for the oboe studio and played principal in both wind ensemble and orchestra at the School of Music. Kelley holds her Master of Music degree from the University of Minnesota, where she was a Berneking Fellow, serving as rotating principal oboist of many of the top ensembles in the School of Music, and was a member of the school’s graduate woodwind quintet. Kelley completed her Bachelor of Music degree at Kansas State University, studying with Nora Lewis. She has also studied extensively with Andrew Parker of UT Austin.

Outside of music, you can find Kelley cooking up some tasty plant-based meals, riding her road bike all over town, or hanging out with her little black cat, Freddie. 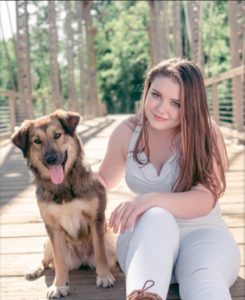 Trinity Grewell is a National Honor Society member who graduated from Parnassus Preparatory School in the spring of 2020. Trinity sings and is currently taking lessons from Opus Vocal Instructor Kaitlin Pearson, and she has been playing viola since the 5th grade and ukulele since the 8th grade.

Trinity is in the youth leadership committee at her church, Robbinsdale Parkway United Church of Christ, where she also plays in the Bluegrass Band. As well, Trinity is in the process of completing her Girl Scouts Gold Project, which is to create and lead a Mental Health Support Group at her high school.

Animals, dogs in particular, hold a special place in Trinity’s heart. She has a dog, Kaia, and a cat, Grace. Trinity also loves to read and has been creative writing since she was a child. Stephen Orejudos is an active teacher and avid proponent of music education in the public schools. He has over 20 years of experience as a private instructor, brass sectional coach, and master class clinician. Mr. Orejudos holds a Bachelor of Music Degree in Trumpet Performance from the Eastman School of Music, and a Master of Music Degree in Trumpet Performance from Wichita State University. His teachers have included Judith Saxton, Kevin Hartman, Mathew Lee, Larry Knopp, Charles Geyer and Barbara Butler. Joseph Snyder has been playing music throughout his life. From an early age, Joseph began to teach himself guitar, going on to lettering his high school jazz band ensemble while also playing for his church and in local rock bands. Since then, he played throughout the country with a wide array of genres including jazz, blues, funk, folk, R&B, and Electronic music and worked with artists throughout the Midwest and Las Vegas. When Joe is not working on music, Joe likes to paint, watch movies and play with Toto, his Chihuahua and best friend!

Search from dozens of expert instrumental and vocal instructors from around the Twin Cities area who best meet your geographic needs, budget, personality and goals.