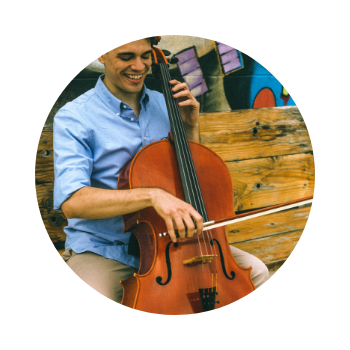 Teddy is a lifelong cellist, having begun lessons when he was six. Hailing from Sioux Falls, Teddy’s studies have taken him to the Interlochen Arts Academy, Arizona State University, Stony Brook University, and most recently the University of Minnesota, where he completed his master’s degree in cello performance. He has played in the South Dakota Symphony since 2010 and has also played in the Buffalo Community Orchestra and appeared as guest principal cellist in the Kenwood Symphony Orchestra. He is happy to call Minneapolis his new home and looks forward to many fruitful collaborations.

In my studio, students are challenged to make music that not only sounds good, but feels good. My goal is to teach technical proficiency and foster a passion for expression.

Students are expected to give notice one week in advance should they need to reschedule a lesson. Lessons canceled less than 24 hours in advance will not be refunded.