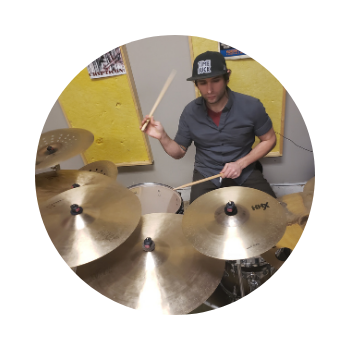 Born in Ashkelon, Israel, Yossi Aharoni is 32 years-old and currently resides in Crystal, MN. Yossi started playing drumset at the age of 17 and began studying music at Normandale Community College three years later. He also attended Winona State University, where in 2015 he graduated student-of-the-year in the music department and earned his Bachelor of Arts in Music with a minor in Jazz and an emphasis in drumset, all while maintaining a 3.5 GPA.

Yossi has classical and jazz music training and has studied drumset, concert percussion, solo and chamber percussion. He has experience playing a variety of percussion instruments, including marimba, timpani, xylophone, vibraphone, concert snare drum, and rudimental snare drum. As well, he’s performed in a variety of ensembles, including wind-bands, orchestras, basketball and football pep bands, as well as small and big band jazz ensembles. Yossi currently plays in a local Minneapolis progressive/djent band.

Some of Yossi’s favorite bands are Umphrey’s McGee, the String Cheese Incident, Tesseract, the Mars Volta, Tool, Animals as Leaders, Protest the Hero, and August Burns Red. His biggest influences as a drummer are Kris Meyers, Jay Postones, Danny Carey, and Matt Garstka. Outside of music, his interests include flow-arts (poi/contact staff) physics, cosmology, astronomy, biotechnology, political theory, and true-crime. Yossi has many pets, including two dogs, a cat, a turtle, and a red-tail boa. In his spare time, he is the General Manager of a local community-based performing arts festival called CampFire that focuses on promoting the fire-arts, aerials and yoga.

Yossi teaches virtually, at the Opus studios in New Hope and Robbinsdale, and in home within 8 miles from the Crystal area, the south end of Golden Valley, and Brooklyn Center.

If a student cancels a lesson with more than a 24-hour notice, we will reschedule to another agreed upon make-up lesson. Anything under 24-hours notice is subject to no make-up lesson and still charged to account, except under specific circumstances (family emergency, illness, etc). If a student is canceling half or more of their monthly lessons on a regular basis, they will be at risk of losing their spot in the studio. If I cancels a lesson (illness, weather, absence, etc.), I will provide a make-up lesson. If no make-up date or time can be agreed upon, the missed lesson will be free of charge.